Investors are in a holding pattern. Here's why

Share
Stocks are up, largely because of Monday’s big gains. Only the Dow struggled, held back by Boeing (BA)‘s more than 10% slide. The plane manufacturer’s stock dropped in the wake of last Sunday’s tragic crash involving an Ethiopian Airlines 737 Max 8 jet.
But it’s been mostly quiet on Wall Street otherwise.
Stocks have been flattish the past few days, and volume has been extremely light. In fact, volume hasn’t been this low since the half day of trading last Black Friday, according to Mike O’Rourke, chief market strategist with JonesTrading.
Why are investors sitting tight?
To start, it seems that they want to see an actual trade deal between the United States and China. There have been plenty of headlines about how there is progress toward finalizing an agreement. But investors may be growing tired of reports, and now crave concrete details.
“Investors are in a holding pattern,” said Suzanne Hutchins, global investment manager for Newton Investment Management. “They are waiting for a trade deal.”

Tom Plumb, portfolio manager with the Plumb Funds, added that the unpredictability of the Trump administration makes it harder to handicap what a trade deal — if one is signed — would actually look like.
“If you are a betting person, you don’t know what’s going to happen. Nobody is assured that things are going to go one way or another,” Plumb said. 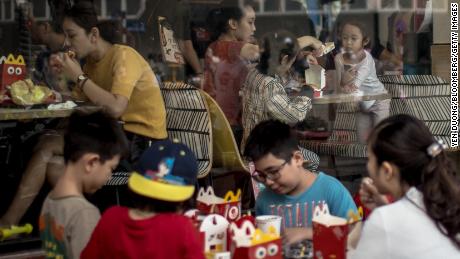 There may also be some unease about upcoming earnings reports. First quarter profits for S&P 500 companies that have significant exposure to sluggish overseas markets like China and Europe are expected to fall more than 10% from a year ago.
Nike (NKE), which generates about 60% of its sales outside of North America, will report its earnings next week. Profits are expected to drop from the same period last year.
“People are rightfully concerned about weakness in the Chinese economy and Europe’s economy,” Plumb said.
That might not already be priced in, though.

Yes, stocks plummeted last November and December on worries about slowing global growth, as well as the possibility that the Federal Reserve may raise rates too aggressively this year.
The Fed fears have mostly vanished now that Fed chair Jerome Powell has repeatedly stressed the need to be “patient” given the various economic “crosscurrents” worldwide.
But stocks have roared back to life in 2019. The Dow is up more than 10%, while the tech-heavy Nasdaq has gained nearly 16%.
As a result, Hutchins thinks that investors may now be overly optimistic and that the Fed, the European Central Bank and other global central banks will have to come to the rescue again as they have repeatedly done in the past.
“The global economy is slowing, as is the US. We may need a huge amount of stimulus to turn things around,” Hutchins said. “The risk is that the economic data will be worse.”