6 things to know before the bell 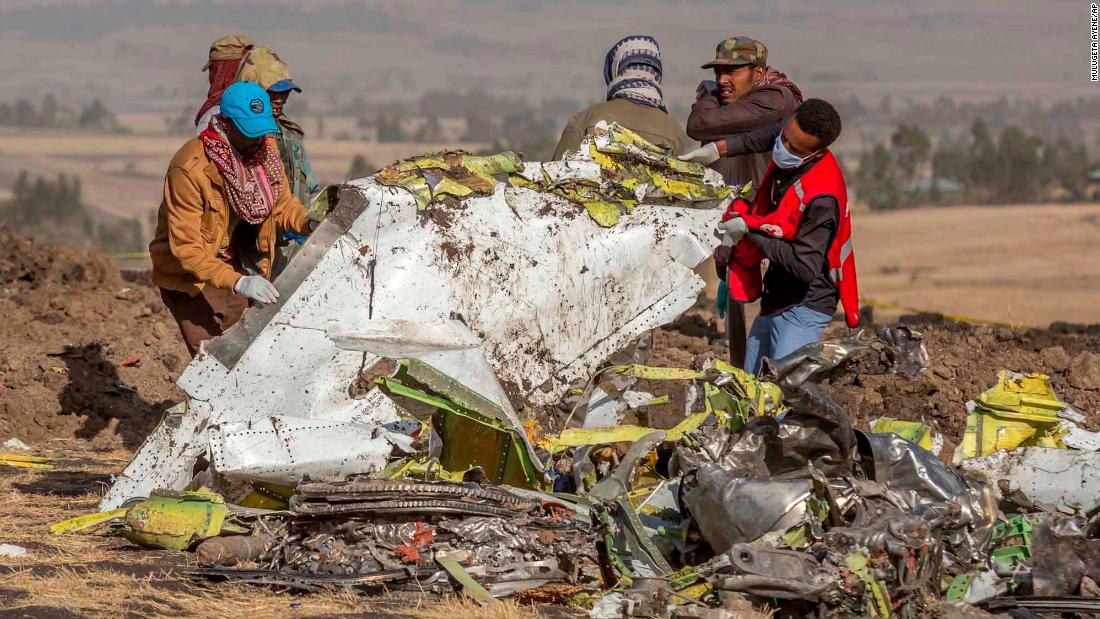 All 157 people on board a 737 MAX 8 operated by Ethiopian Airlines were killed when the plane crashed shortly after takeoff on Sunday. In October, a 737 MAX 8 flown by Lion Air went down off the coast of Indonesia.
Both the Ethiopian Airlines and Lion Air planes were brand-new aircraft. And both went down minutes into flight.
The crashes could result in major consequences for Boeing’s 737 MAX 8 program and tarnish the US company’s reputation for safety. Boeing stock was down 9% in premarket trade.
The Boeing 737 has been a workhorse on short- and medium-haul flights for decades. The 737 MAX is the latest version — and the company’s bestselling aircraft by far. Airlines have ordered thousands of them.
Chinese aviation authorities on Monday told airlines in the country to ground all their Boeing 737 MAX 8 aircraft, citing the need for “strict control of safety risks.” Some individual airlines are taking similar action elsewhere.
Boeing has also postponed the debut of its new 777X jetliner, which was scheduled for this week, as it deals with the fallout from Sunday’s disaster.
2. Tesla store switch: Tesla (TSLA) will raise the price of its vehicles worldwide after going back on a decision to close most of its stores.
The electric car maker said in a statement late Sunday that prices for most models would go up by about 3% after it decided to “keep significantly more stores open than previously announced.”
Tesla had said less than two weeks ago that it would begin shutting most of its stores in a cost-cutting move designed to help reduce the price of its bestselling vehicle, the Model 3, to as low as $35,000.
As part of the plan, customers will have to buy Tesla vehicles online or by phone rather than in person at one of its hundreds of retail outlets.
Tesla still plans to sell the most basic version of the Model 3 for $35,000, which is “excruciatingly difficult” to make at that price, according to CEO Elon Musk.
The 3% price increases will apply to the more expensive editions of the Model 3, as well as the Model S sedan and Model X crossover. The higher prices will take effect on March 18.
Monday is also the deadline for Tesla to respond to the SEC’s request to hold Musk in contempt of a settlement agreement. The SEC says Musk violated the agreement with an incorrect tweet about Tesla production.
3. Powell preaches patience: US Federal Reserve Chairman Jerome Powell said in a 60 Minutes interview broadcast Sunday that he’s not in a hurry to change interest rate policy.
“We see the economy as in a good place,” Powell said. “We think that the outlook is a favorable one. Inflation is muted and our policy rate, we think, is in an appropriate place. So what we’ve said is that we would be patient.”
But the Fed boss acknowledged the global economy faces major headwinds.
“Patient means that we don’t feel any hurry to change our interest rate policy,” he said. “What’s happened in the last 90 or so days is that we’ve seen increasing evidence of the global economy slowing down.”
4. Global market overview: US stock futures were mixed. European markets struggled to find direction after stocks in Asia closed with gains.
The Dow closed down 0.1% on Friday after a disappointing US jobs report. The S&P 500 and the Nasdaq shed 0.2%.
Before the Bell newsletter: Key market news. In your inbox. Subscribe now!
5. Companies and economics: Japanese media reports suggest that Renault (RNLSY), Nissan (NSANF) and Mitsubishi Motors are planning a new leadership structure following the arrest of Carlos Ghosn.
Nikkei reported that the carmaking alliance plans to establish a new body that would make decisions on business collaboration. The companies are expected to announce the changes at a news conference in Japan on Tuesday.
The US Census Bureau will release its retail sales report for January at 8:30 a.m. ET. ADT (ADT) and Stitch Fix (SFIX) will release earnings after the close.
6. Coming this week:
Monday — US retail sales report for January. Tesla’s deadline to respond to the SEC
Tuesday — Dick’s Sporting Goods (DKS) earnings; Wells Fargo CEO testifies before House Financial Services committee; T-Mobile (TMUS) and Sprint (S) CEOs testify before the House Judiciary subcommittee
Wednesday — US durable goods report
Thursday — Dollar General (DG) earnings; New US home sales report; Tesla holds Model Y event
Friday — US industrial production and US consumer confidence report